My name is Kyle Muntean and I am the newest addition to the Trek team bringing with me an eager and energetic passion for the outdoors. After a brief introduction to the office side of things, I was off on the first adventure. La Finca Lodge in San Fernando Mexico was the destination where we would be targeting the infamous dipping and diving White-Winged Dove hosting some of Trek’s finest. Accom 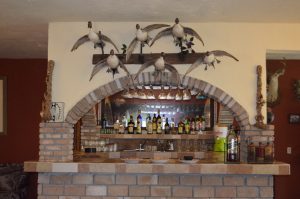 panied by Trek’s VP Joe Patterson, we flew in to Brownsville, TX on Sunday afternoon greeted by a representative from La Finca. After an easy and safe transfer across the border, we arrived at La Finca greeted by outfitter Steve McCain Jr. along with many of the lodge employees. Shortly after our introductions, the group of Trek clients arrived eager to grab one of the welcome margaritas whipped up by barman Fernando. It wasn’t long after finding out I was the new guy, everyone seemed curious about my story and how I landed a job with Trek. After formally meeting everyone, we enjoyed a great dinner and a few cocktails then most retired to bed for an early morning dove hunt. 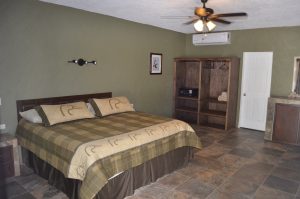 Alarm went off and it was time! Shot out of my bed eyes wide open; ready to experience what Trek is all about. After a nice morning coffee and breakfast with the group we were all excited to get out to the field and bust some feathers. After about a 40-minute drive, we arrived to the spot scouted the day before where everyone got situated with their bird boy. Next thing I knew there was thousands of dove darting in all directions and it sounded like WWIII. Being from Chicago and moving to Southern Illinois to attend college were I have been on quite a few dove hunts, I thought I had been on some good dove hunt but nothing like this. There was more dove than I have ever seen before in all my combined lifelong hunts. As the shoot went on the dove were progressively flying over our heads more and more in large flocks. After a few hours of shooting, the flight started to die down as white-wings hunts traditionally do. Shortly there after it was about time to start packing up and head back to the lodge. Everyone was pleasantly happy with the turn out of the first hunt and the number of doves in the area. It’s pretty amazing to have numbers of doves like this so close to the U.S. as La Finca Lodge is just a two-hour drive from the Brownsville, TX which logistically, makes it incredibly easy to get to. 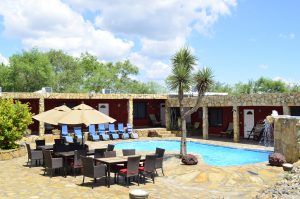 Returning to the lodge after the first hunt we really got to see what La Finca was all about. As we stepped out of the vehicles Fernando greeted us with margaritas, Nachos, and quesadillas. If there is a better bartender out there, I can’t wait to meet him, as Fernando was very attentive keeping glasses filled and making some incredible libations. The group kicked back enjoying the pool while Steve showed Joe and I the upgrades he did during the off-season. Let me tell you there is plenty of room to relax and enjoy the amenities after a good hunt. With two lounge areas in the main part of the lodge complete with large flat screens, you can enjoy football games, play poker, or shoot pool. What would a lodge be without a large bar complete with top shelf liquor as La Finca certainly has this! Steve also purchased two new dining tables made from granite with his Wide Open Outfitters logo engraved in the middle. As we walked out to the pool area Steve described how he remolded the patio and upgraded the hot tub getting it ready for the cooler combo season. He also showed us the newest addition to the lodge; two new staterooms by the pool area bringing the total number of rooms to 14 all with private baths and A/C. One of the best investments Steve has made is purchasing 50 brand new Beretta A400’s (Xtrema & Xplor) in both 20ga and 12ga. I personally enjoyed shooting the 20ga, which is something I haven’t had the pleasure of shooting dove with before, but I tell you I am sticking with it from now on. What a challenging experience. 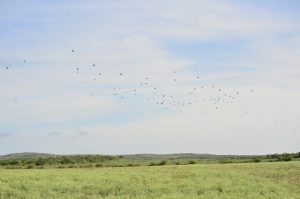 Hunt after hunt we continued to have consistent numbers each day. We never hunted the same area twice and every hunt was different from the next. The scouts were always putting us on the birds
characterizing what I would say was never a dull moment. These scouts new what the birds were going to be doing just about all times of the day. As for the shooting, you could easily shoot 15 boxes per hunt and even 20-25 if you wanted. Joe even mentioned there were 10x more birds than he ever thought and was very impressed with just how consistent the shooting was. We hunted were mostly sorghum fields, but we also hunted in some brush and wooded areas the doves used to rest which ended up being good challenge for the group. Overall we had a great group of shooters so they didn’t have a problem putting the numbers on the board. After each hunt we would go back to the lodge and it would be the same welcome greeting of food and margaritas. We were not food deprived on this trip; we would eat a big breakfast, huge lunch, and an even bigger dinner. It’s not a trip you want to start a diet on before going. Some of the meals we enjoyed included rib eye steak, pork chops, fajitas, and some traditional Mexican dishes. On the last night we enjoyed fresh dove wrapped in bacon with jalapeno and cream cheese and it was fantastic.

Throughout the trip we got to drive around San Fernando and a few other towns either heading out to the fields or coming back from them. There was never a time where I felt unsafe or wary about my surroundings. Kids were playing in the streets, people shopping, and enjoying many of the local restaurants. The Federal Policia and military were apparent; doing normal patrols and Steve educated me on how big of a difference this has made in/around San Fernando. Everything went very well, even crossing the border, whether it was coming in or leaving it was a very simple process that didn’t take long at all. We are really looking forward to returning in November for the duck and wild quail combination trip. It is said to be a phenomenal hunt! My first Trek trip was a great experience and my eyes are certainly wide open now! I look forward to meeting more of our clients and helping Trek continue the success enjoyed since 1973.

Thoreau wrote that “many men go fishing all of their lives without knowing that it is not fish they are after.” Among many interpretations of this quotation is that fishing connects anglers with nature and one another in a way that traces back to the origins of mankind. Connecting with our fellow anglers is an edifying […]

Family, Fishing and Fun in Costa Rica = The Best Father’s Day Ever

Trek and our partners in Los Suenos, Costa Rica, have your Father’s Day hook-up this June. And we can assure you the pun is not only intended, but also a certainty— as Los Suenos offers both an unparalleled blue-water fishing experience and a host of exciting activities that do not involve a rod and reel.

Morocco is THE Global Hotspot for Cultural and Sporting Adventure

Morocco is having a moment right now, as it sits atop nearly every published list of the hottest international destinations for adventure travel. Having experienced this majestic country extensively in planning and hosting adventures for numerous Trek client groups, we can confirm the acclaim is long overdue. Riding in a caravan of camels across the […]

Cordoba’s Dove Season Pause is an Investment in the Future

Cordoba, Argentina — Trek International Safaris is proud to support an agreement to a dove season contraction in Cordoba, Argentina, which all regional outfitters unanimously and voluntarily entered into last year. As a response to Argentina’s worst drought in a century in 2017-‘18, this agreement effectively pauses all dove hunting in the Cordoba province during […]

No visa will be required for US citizens traveling to Brazil after June 17, 2019. In addition to our regular season Amazon Floating Cabins Adventure dates listed below, we are excited to offer a few lucky anglers a rare exploratory peacock bass fishing expedition into the relatively untouched waters of Brazil’s Rio Preto. The Rio […]

The picturesque country of Bolivia has long been a popular destination for adventurous anglers and wingshooters alike. A crown jewel among Brazil, Peru, Chile and Paraguay, this country is rich in agricultural and natural resources and lays claim to being one of the most biodiverse locations on earth. With altitudes ranging from just under 300 […]

WRAPPING UP AN INCREDIBLE Nicaragua Duck and Dove Season

From the questions the Trek team received during the recent SCI shows, one may have surmised the story of the 2018-19 Nicaragua duck and dove season actually played out in the spring of last year. In Reno and Dallas, we continued to receive a high volume of inquiries about the country’s sociopolitical climate; meanwhile an […]

What You Need to Know When Taking Your Guns To Argentina

Shortly after booking his first dove hunting trip to Córdoba last year, our client Mike asked about taking his own gun with him on the adventure. We typically recommend that our clients leave their guns behind when traveling to Argentina, to minimize stress and time required for the day of travel and customs experience. Having […]

“Bebê!” the guide exclaims in Portuguese, excitedly pointing to the water a few meters ahead of the boat. A succession of small bubbles rise up through the root beer-tinted water, each one delicately popping as it reaches the surface. On Brazil’s Rio Negro, this effervescence is an indication of baby peacock bass schooled up beneath […]

Nicaragua Teal Season Off to Typically Strong Start Chinandega, Nicaragua — As the first major migration of ducks flock to their wintering home on Estero Palo Grande Lagoon in northwestern Nicaragua, Trek’s first groups of duck hunters of the 2018-2019 season are returning home with reports of robust blue-winged teal action. With Nicaragua’s rainy season […]

I write to you from the beautiful city of Granada, Nicaragua, offering a first-hand report of the current situation on the ground here. In case you are unaware, this spring brought demonstrations against Nicaragua President Daniel Ortega’s government, leading to clashes that resulted in tragic loss of life. Trek Safaris has maintained a hunting presence […]

For anglers, Patagonia’s trout are unquestionably the fish species most closely associated with destination travel to Argentina. But if you prefer your sportfish with a more savage disposition capable of producing drag-melting runs and tarponian acrobatics, Argentina’s Paraná River is, quite literally, a gold mine. Golden dorado appear to have an inferiority complex about their […]

You've Worked Hard For This
Let's Make It Perfect!

Get started by filling out the contact form below or give us a call!

Trek is known for planning the most unforgettable adventures for our clients. We've been in business since 1973 for one reason: we always place the quality of your travel experience as our #1 priority.
Complete our contact form and let's get started!

Exclusive offers and fresh from the field reports.